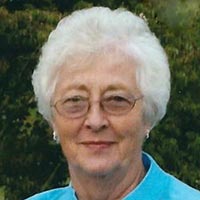 Betty Ellen Harless Roberts, 76, of Pearisburg went to her heavenly home on Monday, May 16th after a brave and courageous battle with cancer. She was born in Eggleston, Virginia on February 4, 1940, to the late Hazel Ann Weiss Harless and Clarence Kelly Harless. She is also preceded in death by four brothers; Cecil Kelly Harless, James Paul Harless, Douglas MacArthur Harless, Marshall Rivous Harless Sr. and one sister; Lois Harless Stafford. Betty graduated as Valedictorian from Eggleston High School in 1957. She was also presented with a Daughters of the American Revolution award. She was married on June, 2, 1961 to James. They were married nearly 55 years as they walked through the journey called “Life”.  Betty retired from the Celanese Corporation in Narrows, Virginia with over 30 years of service. She retired from the Physical Analysis Lab. Betty was a beloved member of the Pearisburg community.  She has been a faithful member of Pearisburg Christ Fellowship for approximately 40 years. She loved the Lord with all of her heart.  In the early 1970’s, Betty was a Girl Scout leader.  She was a member of the “Sewflake Quilters Group” in Narrows, Va.  She absolutely loved to make quilts.  Betty designed one of the quilt squares (Eggleston High School) that is on the quilt currently displayed in the Giles County Courthouse.  Betty also liked to crochet, as well as, make many other crafts.  She also enjoyed working outside in her flower garden, traveling and living life to its fullest.  She adored her grandsons.  They made her heart dance.  She loved them to the moon and back! Betty leaves to cherish her memory, her beloved husband James Roberts; two daughters and their husbands; Susan and Robert Kyle Faust, D.V.M. of Roanoke, VA; Sandy and Dan Troia of Medina, OH; and two grandsons; Robbie Faust of Roanoke, VA and Matthew Troia of Medina, OH. One brother and sister-in-law, William and Betty Harless, of Pearisburg; two sisters and two brothers-in-law, Patsy and Bob Bruce, of Christiansburg, and Diane and Scotty Fewell, of Dublin; four sisters-in law, Charlotte Harless, of Williston, SC, Helen Harless, of Radford, VA, Patty Harless, of Pulaski, VA, and Geraldine Roberts of Covington, VA, as well as, many nieces and nephews and friends. A special mention of thanks goes to Dr. Gretchen Glaser and staff from the Carilion Clinic in Roanoke who lovingly cared for Betty. Also, a heartfelt “thank you” goes to each person who prayed for her health and encouragement. Funeral arrangements will be facilitated by Givens Funeral Home.  A viewing will be held at Pearisburg Christ Fellowship at 1 p.m. followed by the funeral service at 2 p.m. on Saturday, May 21st with the graveside service immediately following at Birchlawn Cemetery in Pearisburg.  Pastors David Bracken and Phil Vickers will be officiating.  Online condolences can be sent to the family at givensfuneralhome.com.