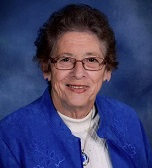 Thelma Lucille Brumfield Williams, 83 of Pembroke, VA, (Maybrook Community) passed away to be with her husband and daughter on Saturday, June 23, 2018 surrounded by her family. Mrs. Williams was born on June 26, 1934 in Pembroke and was a daughter of the late Marshall Black Brumfield and Sarah Ella Meredith Brumfield. Besides her parents, she was preceded in death by her husband of 60 years, Robert Miller Williams, one daughter, Pamela (Pammy) Dawn Williams, two brothers, Charles and Mancel Brumfield, two sisters, Betty Jean Brumfield and Romaine B. Altizer. She started her first job at the Virginian Restaurant in Pearisburg when she was 15 years old and worked for 30 years in the Giles County schools in food service. She was a member of Mt. Lebanon Methodist Church in Hodges Store. She was also known for Lucille’s Hot Dogs, selling hot dogs with her husband at the Hundley Flea Market in Hillsville, VA. for over 30 years. She is survived by one daughter, Robin W. Hundley and Alfred Caudle of Pearisburg, one son, Jeff (Cuz) and Merinda Williams of Pembroke, three grandchildren, Leslie and Roger Simpkins of Pembroke, Jonathan Williams of Pembroke and Dylan Hundley of Pearisburg, five great grandchildren, one special cousin, Lillian (Tootsie) Keffer of Pembroke, faithful dog Scooter and her special friends at Friends and Family Restaurant in Pearisburg. Funeral services will be conducted Tuesday, June 26, 2018 at 11:00am at the Givens Funeral Chapel in Pearisburg with the Pastor Reggie Britts officiating with burial following in the Birchlawn Burial Park in Pearisburg. The family will receive friends at the Givens Funeral Home Monday evening from 6 -8 pm. Memorial contributions may be made to the Newport Volunteer Rescue Squad, P.O. Box 144, Newport, VA 24128. Online condolences can be sent to the family at givensfuneralhome.com.