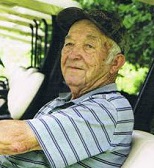 Robert Miller Williams, 88 of Pembroke, VA, (Maybrook Community), went to be with the Lord on Tuesday, May 24, 2016. Robert was born on March 27, 1928 in Maybrook and was a son of the late John Claude Williams, Sr. and Lema Stiff Williams. Besides his parents, he was preceded in death by one daughter, Pamela (Pammy) Dawn Williams, three sisters, Margaret and Mary Sue Williams, Rachel W. Atkins, one brother, John Claude Williams, Jr. Robert was born and was a life long resident of Maybook, was an Army veteran stationed in Germany, and was a retired millwright at Celanese in Narrows with 43 years service. Robert also was in the business of buying, selling and trading golf carts for over 35 years, with the help of his friend C.C. and also providing maintenance for the carts, whether you brought the cart to him or in time of crisis, him coming to the rescue. He is survived by his wife 60 years, Thelma Lucille Brumfield Williams of Maybrook, one daughter, Robin W. Hundley and Alfred Caudle of Pearisburg, one son, Jeff (Cuz) and Merinda Williams of Pembroke, three grandchildren, Leslie and Roger Simpkins of Pembroke, Jonathan and Miranda Williams of Pembroke and Dylan Hundley of Pearisburg, six great grandchildren, two brothers, Gerald and Sadie Williams of Maybrook, Richard and Bonnie Williams of Maybrook, one sister, Jean Williams of Roanoke and faithful dog Scooter. Funeral services will be conducted Friday, May 27, 2016 at 11:00am at the Givens Funeral Chapel in Pearisburg with the Pastor Reggie Britts officiating with burial following in the Birchlawn Burial Park in Pearisburg. The family will receive friends at the Givens Funeral Home Thursday evening from 6 -8 pm. Memorial contributions may be made to the Newport Volunteer Rescue Squad, P.O. Box 144, Newport, VA 24128. Military Honors will be given by American Legion Post #68 in Narrows American Legion Post #311in Pembroke and VFW Post #6000 in Narrows. Online condolences can be sent to the family at givensfuneralhome.com.