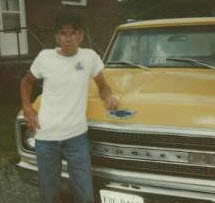 WILLARD LEE SANDERS, 68, of Pembroke, departed this life Wednesday afternoon, May 11, 2016 at his home in the loving care of his wife, relatives and hospice. Born in Giles County on April 27, 1948, he was a son of the late Woodie Lee and Annie Neice Sanders. He had worked for many years at Patrick Enterprises during the several transitions of the business and retired as a truck driver. He was a 1967 graduate of Giles High School. Willard was also preceded in death by his first wife Debbie Fuller Sanders.

Funeral services will be conducted Sunday, May 15, 2016, at 3:00 pm, in the Kendall Funeral Home, 605 Snidow St., Pembroke with Pastors Alvin Trivette and Eddie Kendall officiating. Burial will take place at 11:00 am, Monday at Birchlawn Burial Park in Pearisburg. The family will receive friends at the funeral home two hours before the services. Online condolences may be sent by visiting kendallfuneralhome.com