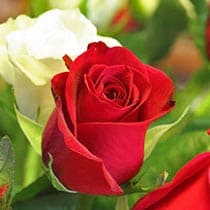 BERTHA ELIZABETH WRIGHT TALBERT of the White Gate Community, Giles Co., passed away peacefully on the morning of December 5, 2015 at her home at the age of 91. She had been in declining health since suffering a stroke in May of 2011, from which she never fully recovered. A daughter of the late John Jackson & Ella Jane Strader Wright, she was the last survivor of eight children and was born in the Robinson Tract community of Pulaski County on September 23, 1924. Bertha’s was a life well-lived, as measured by all that matters. Growing up during the Great Depression, moving more times than one could imagine, living with shortages and rationing during WWII, she was an outstanding example of self-giving love. A soft spoken and caring wife, mother, grandmother and friend, she was loved by all who knew her. She loved unselfishly, always giving, helping and fulfilling her calling as a Mother, wife and neighbor. Well known in her community as an excellent cook and seamstress, she often shared her abilities with others. Quilting and knitting were her favorite pastimes. She was a long time member of Walker’s Creek Baptist Church until the church closed at which time she and her husband moved their membership to Shady Grove United Methodist Church, Poplar Hill, where she remained a member until her death. Bertha was preceded in death by her husband of 63 years, Paris W. Talbert, Sr., her son, Paris W. Talbert, Jr., her grandson, Wesley Talbert, her great-grandson, Gage Price and her son-in-law, Thomas Farmer. She is survived by her daughters, Elizabeth Miller and her husband Ernie, Poplar Hill, Patricia Farmer, Dublin and Barbara Spangler, of the home; her sons, Michael Talbert and his wife Joyce, Poplar Hill and Danny Talbert and his wife Bonnie, Newbern; her daughter-in-law, Betty Talbert, White Gate; eleven grandchildren and their spouses, Bill & Samantha Talbert, Lisa & Todd Jones, Angela Clemons, all of White Gate, Shannon & Whitney Miller, Roanoke, Lori & Zeb Bowden, Poplar Hill, Kevin & Britney Talbert, Dublin, Thomas & Andriette farmer, Stanley, NC, Sherri & Justin Jones, Pearisburg, Paige & Josh Airey, Mooresville, NC, Patti & Eric Price, Poplar Hill and Brandon Farmer, Cornelius, NC. She is also survived by eighteen great-grandchildren, one great-great-grandchild and many nieces and nephews. Visitation will be at A. Vest & Sons Funeral Home, White Gate, on Sunday, December 6, 2015 from 6:00 P.M. until 8:00 P.M. Funeral services will be held Monday, December 7, 2015 at 2:00 P.M. at Shady Grove United Methodist Church, Poplar Hill, with Rev. Wayne Monroe and Rev. Amy Bartee officiating. Burial will follow at Walker’s Creek Cemetery, White Gate. In lieu of flowers, the family requests donations be made in her memory to Shady Grove United Methodist Church, 369 Walkers Creek Valley Road, Pearisburg, VA 24134. The family is in the care of A. Vest & Sons Funeral Home, White Gate, avestandsons.com, (540) 921-2985.