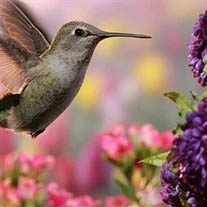 Flora Carte Wylie, 95 of Staffordsville, VA went to be with the Lord on April 6, 2016 at her home.  Mrs. Wylie was born on October 3, 1920 in Jamoca, WV and was a daughter of the late Charles Edward Carte and Annie Elizabeth Foster Carte.  Besides her parents she was preceded in death by her husband Maylon Alvis Wylie and a son, Earl Edward Gravely of Cleveland, OH.  She is survived by her granddaughter, and love of her life, Denise  Kay Buracker of Staffordsville and her spouse, Aaron S. Buracker of Pearisburg, two grandchildren, Gavin and Natalie Buracker of Staffordsville, one nephew, Vernon Fitzwater of Westville, IN, one neice, Ruby Cochran of Charleston, WV and special caregiver, Allen Dale Sadler of Staffordsville, VA.  A service of love was held while she was still with us.