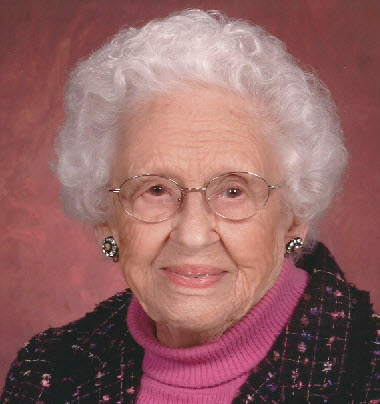 Mrs. Rosamond Cordella Hicks Coulthard, 103 of Pearisburg, VA. passed away November 20. 2015.  She was born September 7, 1912, in Bridle Creek, VA to Carliele Preston Hicks and Hattie Maye Halsey Hicks.  The oldest of seven children, she grew up in Atkins, VA.  As a teenager she joined Davis Memorial Methodist Church.  Rosamond attended Marion College and was a teacher for seven years, starting in a multi-grade, one room school house. During the summer months for 12 years, as a student then a teacher, she worked for an aunt at a Methodist deaconess rest home at Mountain Like Park, MD.  In 1940 she married  Marvin E. Coulthard and they were active in the Laurel Springs Methodist Church near Marion.  They moved to Pearisburg in 1949 where Marvin opened an automotive parts store.  They joined First United Methodist Church where she served in capacities, including Sunday school teacher and United Methodist Women.  Rosemond and Marvin helped organize a Sunday school at Ingram Village, which later became an active church.  They were supporters of the Bible Bus program in Giles County and they were life time members of the Lake Junaluska Associates.  Rosamond was also a member of the Pearisburg Garden Club and participated in the Eastern Star for 19 years.  She and Marvin enjoyed square dancing, taking friends to Claytor Lake and traveling.  In addition to her parents, Rosamond was preceded in death by her husband Marvin E. Coulthard; two sisters – Zell Hicks and June Counts; four brothers and sisters-in-law – Paul & Lucille Hicks, Leon & Dorothy Hicks, Rody & Agnes Hicks and Henry Hicks. She is survived by son and daughter-in-law Curtis & Mary Coulthard of Pearisburg, son David Coulthard of Tarbobo, NC, and daughter and son-in-law June Marie & Larry Johnston of Lebanon, VA,; and by grandchildren Kimberly Perkins (Jeff), Cheryl Ball (Jonathan), Caroline Gibbs (Richmond) and Adam Johnston; and by great-grandchildren Savanna Gibbs of Florida and Brilee and Aidan Perkins of Salem, VA,; and brother-in-law Reed Counts and many nieces and nephews.  A service celebrating Rosamond’s Life will be held on Tuesday, November 24, 2015 at 11:00am at First United Methodist Church in Pearisburg with the Rev. Dr. Brian Burch and the Rev. Dr. Fred L. Austin officiating with entombment following in the Birchlawn Abby.  The family will receive friends at the Church on Monday evening, November 23, 6:00 – 8:00 pm. Givens Funeral Home is in charge of arrangements.  Memorial contributions may be made to First United Methodist Church, 1101 Valleyview Drive, Pearisburg, VA. 24134, or to the charity of your choice.  Online condolences can be sent to the family at givensfuneralhome.com.